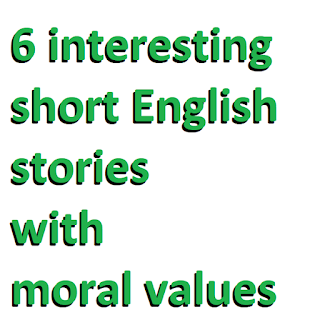 1. The wisdom of a cock's hideout

Once upon a time, there used to be a lot of chickens in a village. The village child had harassed any one chicken. The cock got upset, he thought I would not make a sound the next morning. Everyone will keep sleeping, then everyone will understand my importance, and will not tease me. The cock did not say anything the next morning. All the people got up on time and started doing their work, on this, the chicken understood that no work stops without anyone. Everyone's work goes on.

Ethical education - do not boast. Your importance is revealed to people without informing them.

Moral of this short English stories - Never be too arrogant. Your work should tell your importance to the world.

Whose work it was, the lion tried to copy the man and the result proved to be wrong.

Pinky is a very sweet girl. Pinky teaches in class II. One day he saw a train in his book. He remembered his train journey, which he had done a few days earlier with Papa-Mummy. Pinky raised the chowk and, what was then, made the train engine on the wall. The first box was added to it, the second box was added, many boxes were added. When Pinky woke up in the square, she saw that a train had been built on half the wall of the classroom. Then what happened - the train went to Delhi, went to Mumbai, went to America, went to Nani's house, and also to Grandpa's house.

Ethical Education -
Boost the morale of children, let the future of tomorrow be built from today.

A mischievous mouse arrives at Golu's house. He was very small but used to run in the whole house. He had also written a book about Golu. Some clothes were also given by the dog. Golu's mother who cooks and keeps it uncovered, the rat used to lick her too. The mouse was grown by eating and drinking. One day Golu's mummy kept the syrup in a bottle. The mischievous mouse looked at the bottle. The rat was tired of many tricks, he had to drink syrup.

The rat is able to open the lid in some way mounted on the bottle. Now the rat tries to penetrate it. The mouth of the bottle was small, it does not penetrate. Then the rat got the idea, he put his tail in the bottle. The tail becomes wet with the syrup and by licking it, the rat's stomach is full. Now he started resting on his bed made under Golu's pillow.

Ethical education -
no work is impossible by working hard.

Dholu - Molu had two brothers. Both played a lot, studied and sometimes fought a lot. One day both were playing behind their house. There were two small cats in a room. The cat's mother had gone somewhere, both children were alone. He was hungry and was crying a lot. Dholu - Molu heard the sound of both kittens and called his grandfather.

Grandpa saw both kittens were hungry. Grandpa fed the two kittens and fed them a bowl of milk. Now the cat's appetite subsided. They both started playing amongst themselves. Seeing this, Dholu-Molu said the cat survived. Grandpa complimented Dholu-Molu.

Ethical Education -
Happiness comes from doing good to others.


(English short stories with moral for kids)
Ritesh studied in class III. He had three small cute rabbits. Ritesh loved his rabbit very much. Before going to school, he used to bring green soft grass from Pak and feed his rabbit. And then went to school. He used to bring grass for him even after coming from school.

It is a matter of one day that Riteish was delayed for school. He could not bring grass, and went to school. The rabbit was not in his house when he came from school. Ritesh searched a lot but could not find anywhere. Everyone asked, but the rabbit could not be found anywhere.

Ritesh became sad, crying and eyes turned red. Ritesh started crying in the park. After a while he sees that all three of his rabbits were eating grass, and playing. Ritesh was happy and understood that he was hungry so he came to the park. If I feel hungry then I ask for food from my mother